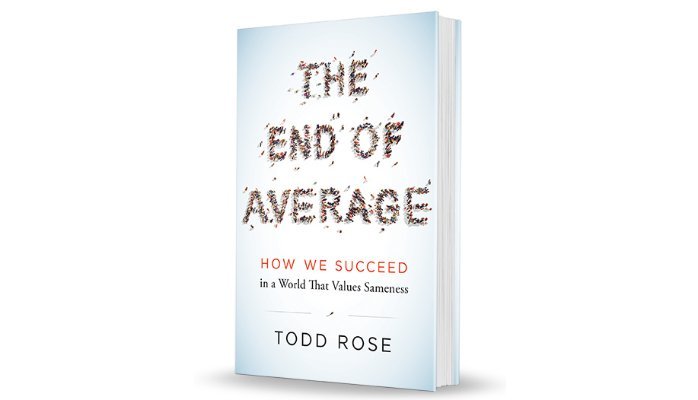 After a couple of years of less focus on reading, I’ve been back on track with my old reading habits (as you can see on my Reading Challenge on Goodreads). I’ve especially been able to keep track of some management eBooks that had been sitting for some time on my Kindle account and will report on some of these over the next weeks.

The End of Average was published in 2016, and has had great success. I don’t recall exactly when I bought it, normally this happens when finding a reference in an article or another book. In any case, am happy about the choice of buying it and reading it.

Todd Rose analyzes in this books the widespread perception that Individuals do not matter in a lot of domains, including design, management, education.

The End of Average tracks down this to some major “mistakes” that affected the history of Social Science. The first is down to Adolphe Quetelet, a Belgian mathematician, who was the first to use mathematical averages to identify common traits in human beings. His famous study on the soldiers’ average chests, has been the beginning of a major overhaul in how people where identified and treated in social sciences.

Average, and later on Ranking (that the author refers together as Averagarianism) have created a revolution in Social Science, that led to the birth of Scientific Management and Taylorism, with the consequence that systems came first, and man (reduced to parts of efficiency) needed to adapt to the system.

Typing and ranking have come to seem so elementary, natural, and right that we are no longer conscious of the fact that every such judgement erases the individuality of the person being judged.

Even if Taylorism is now seemed like a negative word by many (and this view has been consolidated in the last decades), it’s true that many basic assumptions are still existing. Most of Talent Management, argues Rose, is still based on the assumption that we can summarize individuals in one “number” (make it potential, performance or an average of the two). Forced rankings are still defaulted in many organizations, and continue to cause issues. This can be seen also in the continuous use of personality testing, that tend all to reduce individuals to a “fit” organized on a number of different dimensions (and way too often just to adhere to what the manager wants).

Another area explored, is the effect of this approach on Education and Training. All the educational systems are framed to get people to adapt to an “average” curriculum, instead of allowing individuals to find their own paths and bloom. An area we have seen analysed also recently.

One of the most interesting consequences of “Averagarianism”, is the link with Diversity and Inclusion practices. The concept itself of “Equal Access”, comments the author is an averagarian solution to an averagarian problem. Stating that we need x% of women simply to reflect an average of the population, again forces people to “fit” an average solution, which in the long term does not allow for real opportunities to be achieved.

The End of Average: What’s in it for me?

I think that a key concept (and the solution proposed by the author) is the fact that at the end if we all look at our own life, we all walk the road less travelled. If I see my personal career, I have done many things that do not “fit” a traditional HR curriculum. And I am aware that this is actually an advantage both for my profession and how I’ve been able to contribute to the business. A key concept also for the “Rebel” mindset seen in other books.

The End of Average in a Nutshell

The End of Average: How to Succeed in a World That Values Sameness Todd Rose Management Penguin 2016 Paperback 256 pages Buy on Amazon
☆☆☆☆☆

The End of Average Reviews