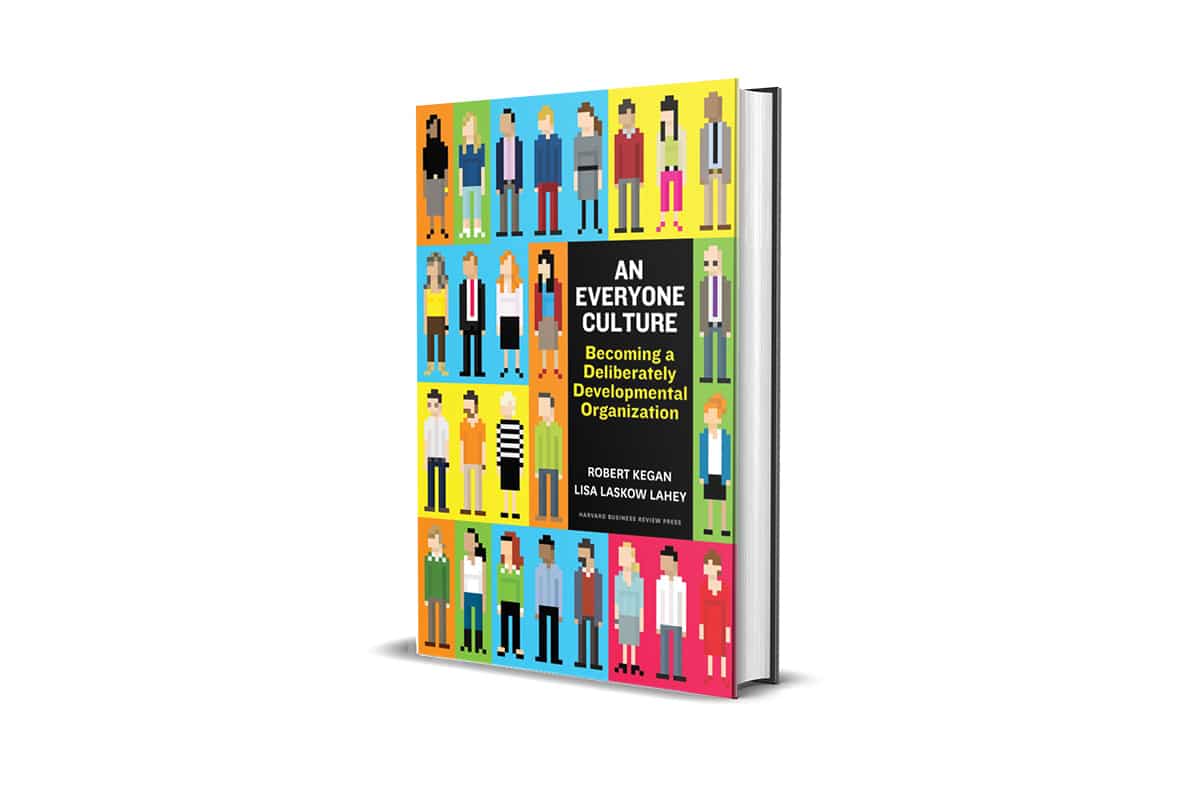 An Everyone Culture is another eye-opening book that focuses on how organisations should be organised to provide real meaning for their employees. Its subtitle, Becoming a Deliberately Developmental Organization, immediately looks at the solution that the two authors, Robert Kegan and Lisa Laskow Lahey, both faculty at Harvard University, are suggesting. I must admit that the book is not the usual business book. There’s much research behind it, both in the field (with a few case studies that are used across the book), but above all a constant reference on psychological research.  The book starts with a simple observation. Everyday…

…most people are spending time and energy covering up their weaknesses, managing other people’s impressions of them, showing themselves to their best advantage, playing politics, hiding their inadequacies, hiding their uncertainties, hiding their limitations. Hiding.

Robert Kegan and Lisa L. Lahey, An Everyone Culture, page 1.

It’s from this observation that the research of this book starts.

research shows that the single biggest cause of work burnout is not work overload, but working too long without experiencing your own personal development.

Robert Kegan and Lisa L. Lahey, An Everyone Culture, page 2.

The authors analyse the theories of personal Development applied in organisations and notice that very rarely, there is a match between the organisation and the individual in terms of talent. Organisations tend to focus solely on the “Talent”, the individual, and they need to resort to external sources (trainers, coaches) for its Development. Their holistic approach is instead really focused on bridging that gap between Talent and Culture we have recently seen forming.

The concept of a Deliberately Developmental Organization (DDO) starts from these basis. Its companies that have developed cultures that are safe enough and demanding enough that everyone comes out of hiding. In which the relationship between realising human potential and organisational potential is dialectic, not a trade-off.

Chapter 1 introduces the three organisations that are used across the book to demonstrate how DDOs work. They all start from one foundation. In a DDO needs to take responsibility for the workings of our minds so that we can stay present, so that we can stay at work.

Chapter 2 examines what the authors mean as Developmental, and looks at how the concept of Development has evolved. The authors are clear: they don’t refer to Development as the increase of “size” of an employee’s position, but instead of the development of the person having the career. This starts with a review of the Adult Development theory and how this had evolved. In the past, it was thought that Development could not happen in adults. The reality is that Adult Mind develops in stages, and there are three “Plateau” that help adults make sense of the world.

At each Plateau, I will see the world differently. For example, at a Socialized Mind stage, my communication will be highly influenced by what I believe others want to hear. The Self-Authoring Mind instead will use filtering abilities to manage information flows. And so on. The authors argue that in the past, in organisations based on the mechanical metaphor, it was sufficient for workers to be at the level of the Socialize mind. This is not sufficient anymore. Organisations are asking people to shift to Self-authoring mind, and we need to accompany this evolution with the right tools, which is why, they argue, Development has a business value in itself.

Characteristics of the DDO

In chapter three, the authors examine the key attributes of the DDO, which are grouped into three dimensions: Edge, which is the development aspirations of the individuals and the organisation. Home, which is the way how Development occurs through Communities. Groove, which is the set of Developmental Practices that are put in place.

Each dimension is divided into four attributes, for a total of 12 that are analysed in detail. I won’t go in detail on any of these, as the titling is perfectly understandable. It’s easy to notice how there’s a definitive reference in wording on the Groove and the Jazz Concept we have seen already covered by the last book I reviewed Yes to the Mess by Frank Barrett.

Chapter 4 gets more specific about the tools, and it titled In The Groove. The basic concept is that Development is not seen as a once-off activity, but it’s about continuous practice. The list of tools is fascinating, although I can think about other similar ones to be created. To a certain extent, these tools resemble some of the tools used in Agile, and their role is very similar: constantly nurture the practice. As we’ve seen in the book Agile People one of the principles of agility is to create some “Ceremonies” almost “Rituals”: an element that stresses their strong relationship with the culture we want to build.

Chapter 5 looks at the Business Value that is generated by this way of operating, as it attempts to shrug off the typical reaction of managers to such drastic departures from the traditional organisation set-up. The Bridgewater case is probably the strongest: for a company operating in the FInancial investment Industry, practising such a culture is a game-changer. And the results show it.

The culture always wins, but not because it is put above profitability; profitability is the oxygen that keeps the company alive.

Robert Kegan and Lisa L. Lahey, An Everyone Culture, page 176.

Chapter 6 focuses on the component of Edge. The basic idea that the authors express here is that DDOs are continually working on the Edge, as they are continually reconsidering their blindspots. This is how Development really happens. To do this, the authors have created an exercise called Immunity to Change. This deserves some functional space in a specific post.

Moving to a Deliberately Developmental Organisation

The last chapter talks about how to create home and mostly talks about the roadmap to becoming a Deliberately Developmental Organisation. The journey is for sure not easy, and the authors appropriately identify top managers as those that should make the decision and start actions. For sure, it is possible to take some steps also at the individual level, but that is another topic.

To achieve this, Kegan and Lahey introduce a Heuristic Four-Box model, that looks at change by looking at the distinction between the individual and the organisational and between the exterior and interior. The author of this model is Ken Wilber. His motivation as he designed this model was to remind people of their tendencies to look at broad phenomenon only through too few lenses. A problem we have seen when we have talked about Systems Thinking.

The Four Box heuristic invites people two are thinking about moving in the direction of a DDO to keep their eyes on all four boxes, from a holistic perspective. The idea is to fill in each quadrant with what is relevant, as this still expresses a partial view provided by the authors.

The authors also introduce a work-in-progress assessment to measure the readiness of an organisation in its journey to becoming a DDO. It looks at the three dimensions identified of Edge, Home and Groove, and each is deconstructed in several features that allow painting a rich picture of the organisation.

Conclusion: An Everyone Culture

The journey through this book is fascinating, although not the easiest. Understanding the pivotal change that is needed to become a Deliberately Developmental Organisation is a massive task. Yet the authors can demonstrate not only its feasibility but the business case behind this focus.

there are indeed places for labor that can transform the meaningfulness of the single greatest use we make of the waking hours of our lives.

Robert Kegan and Lisa L. Lahey, An Everyone Culture, page 288

An Everyone Culture is a real discovery of rebellion. Which also made me think that becoming Deliberately Developmental is not only an organisational attribute, but also an individual one. Its the way we can develop Followership as well as Leadership. As we develop the Organization of the Future, we need to tap into this wealth of information.

And you? What do you think of this book?

An Everyone Culture in a Nutshell

An Everyone Culture Reviews