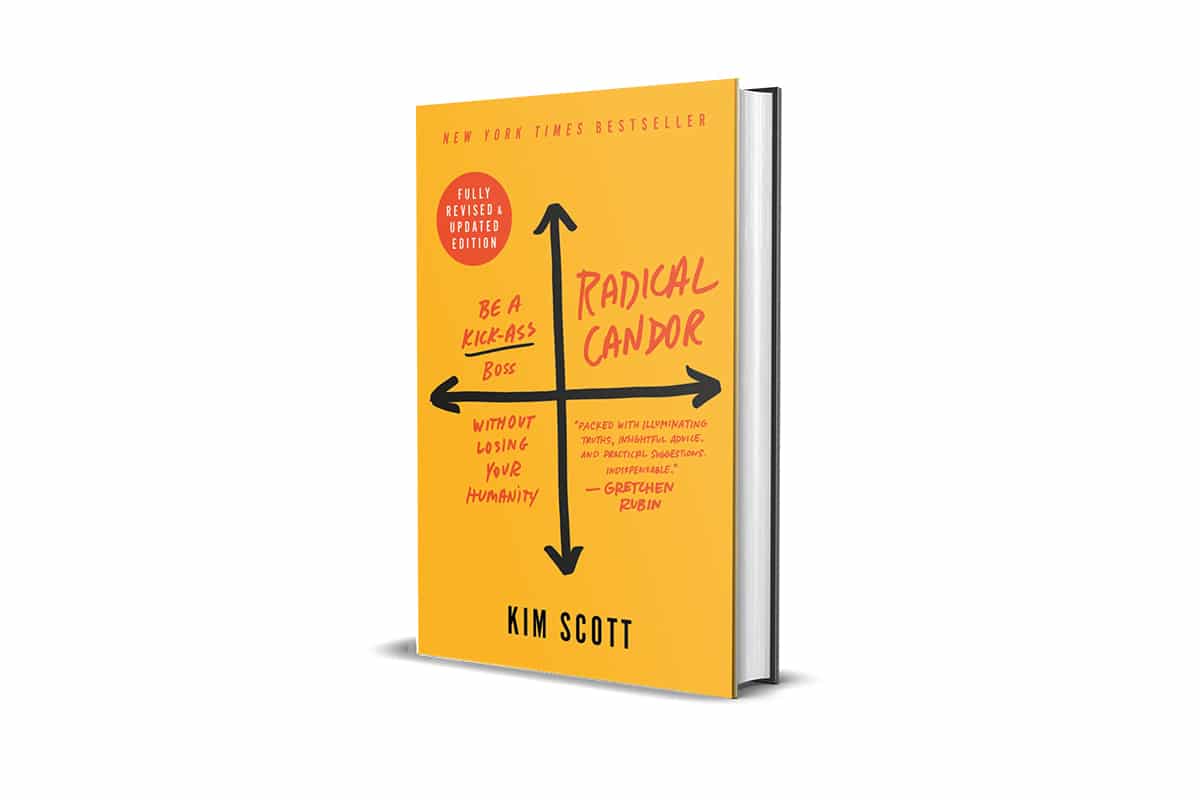 Radical Candor is a book written by Kim Scott, a successful Silicon Valley manager that turned into an entrepreneur with her own company fully devoted to spreading the concept of being Candid. It’s also a book about the journey of discovery of how to be a better boss, simile to a certain extent to what we have seen in Ed Catmull’s Creativity inc. book. It’s interesting that both take a stage at candour as one of the key ways to become better managers.

At the beginning of the book, Kim Scott takes a stand at trying to define what management is. What is that managers/boss/leaders do?

They achieve these results not by doing all the work themselves but by guiding the people on their teams. Bosses guide a team to achieve results.

She identifies three areas of responsibility for managers:

Out of her experience, she also stresses the importance of relationships, as these are the key drivers for successful managers. These, together with your responsibilities as a manager and the culture of the organisation, create a virtuous cycle for management.

Figure 1 shows the representation of this cycle. It’s easy to immediately see that things can go quickly wrong by simply unbalancing one of the elements of the model. Trust is the glue that keeps everything working at the level of relationship, and Candor is the main element to develop Trust.

What is Radical Candor?

Kim Scott builds a model to define what Radical Candor is. She starts by observing different ways of interacting and giving feedback and has developed a quick visual matrix that allows understanding the different styles. And she maps them on two axes that are 1) about Care Personally (which is how much you care about the relationship) and 2) about Challenge Directly, which goes around telling people when their job is good (or bad).

This matrix is not an assessment model. The author is clear in stating that we all might go through all 4 of the different styles sometimes also multiple times in the same day. The challenge is to go intentionally to the Radical Candor quadrant as much as possible for all the valuable relationships we have.

I like especially one aspect of the model, the personal care dimension. This human side is what inspired me the most in the book. It focuses on the person and its importance in terms of being a team member, which leads to a sense of management that Kim has discovered which I believe we should highlight.

My humanity was an attribute, not a liability, to being effective. (Kim Scott, Radical Candor)
Click to Tweet

Radical Candor is not a hierarchical attribute; it needs to be practised in all directions in organisations. It requires energy, which is why it should not be looked at constantly, but only when needed. And the secret to developing it, as a manager, is to ask for candid feedback first.

It’s easy to fall in the other quadrants, and I think we have all experienced managers and colleagues that quickly fall into one of the different three categories. I felt Ruinous Empathy to be the most interesting one when we think about the importance of the relationship. Still, we fail to challenge the other, which essentially means we don’t care about her/his development.

Chapter 3 introduces a fascinating consideration about how to manage teams and addresses the mindset linked to traditional Nine Box based talent Management. The author pushes for managers to think in terms of the motivation of their teams, and not by applying simple maths. She challenges the concept of potential and prefers using growth instead.

The result is a matrix that takes into consideration personal preferences and motivation, and does not consider only the “high potential“. In this, she also introduces three management styles often appearing when talking of employee development: Absentee Manager, micromanager and Partner. Of course, the preference is for the last option.

Chapter 4 focuses on how to drive performance. It is based on the assumption that telling people what to do doesn’t work. For this, she introduces what she defines at the Get Stuff Done Wheel. A 7 step iterative process that can support growth.

First, you have to listen to the ideas that people on your team have and create a culture in which they listen to each other. Next, you have to create space in which ideas can be sharpened and clarified, to make sure these ideas don’t get crushed before everyone fully understands their potential usefulness. But just because an idea is easy to understand doesn’t mean it’s a good one. Next, you have to debate ideas and test them more rigorously. Then you need to decide—quickly, but not too quickly. Since not everyone will have been involved in the listen-clarify-debate-decide part of the cycle for every idea, the next step is to bring the broader team along. You have to persuade those who weren’t involved in a decision that it was a good one, so that everyone can execute it effectively. Then, having executed, you have to learn from the results, whether or not you did the right thing, and start the whole process over again.

It is interesting the parallel with a lot of the critical skills we have already seen: Listening, Curiosity, Learning Agility, Decision Making, Authenticity.

Part II of the book includes several tools and suggestions to apply the general principle above. Again we can see the idea of building rituals where Candor can be central and become an asset for the entire organisation. It includes everything from setting up physical space tot he way guidance is performed. Without mentioning it, Kim Scott gives an excellent push for employee experience as a critical aspect to deliver value. Also interesting the chapter in the appendix on how to build Radical Candor in Performance Reviews.

Overall a great book in terms of concepts, with the only downside that it nurtures itself too much of the typical Silicon Valley guru presence. For sure, the author demonstrates consistency and vast experience, but she does not present enough in-depth case studies to understand the ins and outs of her approach truly. However, this book will make it in my next iteration of the top 25 books I read, as I genuinely think it’s useful for managers.

Joined with books such as Ed Catmull’s one, or linked to the concept of being deliberately developmental, it starts getting an entirely different weight.

Radical Candor in a Nutshell