On February 24th, Russia’s Armed Forces have started a land invasion of Ukraine. An event we all would think should have been limited to History Books referring to the last century, is happening under our eyes. As I was driving on the Highway between Trieste and Venice, seeing a number of cars with Ukrainian license plates, made this even more real. I know people in Kyiv and its surroundings. I have been there a couple of times.

Yes, there have been many other conflicts we should have probably considered more. And yes, this invasion is not the result of a recent event, but the development of a situation that was in the making for the past 20 years, with Russia turning to an autocratic illiberal country.

However we see it, it’s not just Ukraine under attack, it is democracy and freedom in itself. There are people on the ground facing. war in a capital that could have been Vienna, Warszawa, Milan, Paris… so for the past days I have been trying to figure out what can I do?

Table of Contents
1. Building Resources Together
2. Concrete Actions that we can take as HR
2.1. 1. Supporting Employees and Remote Workers who are in Ukraine today
2.2. 2. Supporting Ukrainian refugees as they leave their country
2.3. 3. Supporting Relatives of Ukrainian Citizens
2.4. 4. Other Support Options
2.5. 5. What about workers in Russia?
3. Conclusion

In a moment where so much information is needed, it is often difficult to quickly sift what is relevant from the rest. Particularly if you are looking for information from a specific angle. For this reason, I have started creating a collection of resources specific for HR on the war in Ukraine, using Notion as a tool to build the site called HR For Ukraine: https://bit.ly/HRforUkraine 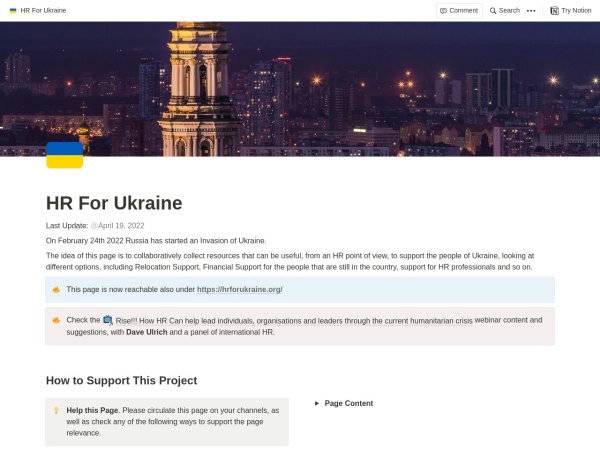 The HR For Ukraine Notion Site

Concrete Actions that we can take as HR

As an HR professional, I have been specifically asking myself what can we do as a professional community.

I think there are several areas of support where RH can make a difference.

1. Supporting Employees and Remote Workers who are in Ukraine today

Many HR professionals have been busy these days trying to communicate with their staff in Ukraine (also including many remote workers). Ukraine has been a destination country for many outsourcing projects, especially in the technology sector. Only a few companies have e been able to relocate their workforce to neighbouring countries (especially Poland).

As the situation evolves (and it is difficult to predict any outcome at this stage, also because it is not clear what exactly Putin’s objective is) it’s difficult to foresee what can be done. For sure there are a few activities that HR is and will be busy with:

Currently, as of February 24th, all Ukrainian Male citizens between 18 and 50 have been called to the army to protect the country. Depending on the length of armed operations, this could be a significant disruption to any business operation, and when restarted this means an important effort to support workers.

This also means that Relocation Support will currently be limited to the people that can expatriate.

2. Supporting Ukrainian refugees as they leave their country

Waves of refugees have already reached all neighbouring countries (Poland, Romania, Moldova, Slovakia and Hungary) and are also underway to other countries, especially in Western Europe. Countries and the local populations have been supportive in this phase, and the EU and various UN agencies are coordinating efforts. Hopefully, the goal is to see these people going back to their country and living in a peaceful situation, but we know from previous experience that refugee status is definitely not an easy journey.

In the medium to long run, people will especially need jobs to ensure economic security, and not depend on state and international agencies for help. In many countries, refugee status doesn’t always make it easy for companies to hire but seems that many countries are taking a different stance this time, although decisions may vary.

Several of these actions should probably be taken as part of larger CSR initiatives.

With more than 5 million people of Ukrainian descendence, the Ukrainian diaspora is one of the largest emigrant countries from the Eastern part of Europe. For this reason, as HR professionals, we need to consider also what type of support might be needed for current employees, as they might have ties with Ukraine.

This means developing tools and resources in terms of:

This war is probably the time to revise current Employee Donation Matching policies, or develop an entirely new one. When war situation emerge, it is particularly important to be able to vet the different charities and support organisations that require funding.

In many countries, this could mean also showing support with work donation, in the form of volunteering hours by your employees. Also here, having a policy at hand is very important in these cases.

5. What about workers in Russia?

One of the most importan aspects to consider here is also how to manage relationship with workers in Russia. I believe that we are all aligned on not considering the Russian people responsible for this invasion, who has been decided by the political elite of the country. Yet, the current wave of sanctions will create a number of issues for workers in Russia that HR should be ready to consider.

This is just a list of what I could cover. The concept of “War” in an HR concept has often been limited to the so-called war for talent. However, I think this entire action plan fits well with my journey of making HR more human. I welcome any suggestion on this topic, either through the comments on this article or via the contact form. Please also ensure you suggest any relevant resource for the HR For Ukraine page.

👉 #HRForUkraine is a collection of resources for HR professionals involved with the Humanitarian Crisis in Ukraine, but also for the employement impacts unfolding in Russia and Belarus.

Except where otherwise noted, The Sergio Caredda Blog by Sergio Caredda is licensed under a Creative Commons Attribution-ShareAlike 4.0 International License.

Links to Books on this page may direct to the Amazon website. If you buy the book through these links, I might earn a small commission based on total expense.

Receive blog updates, an exclusive article and a curated selection of contents, weekly.