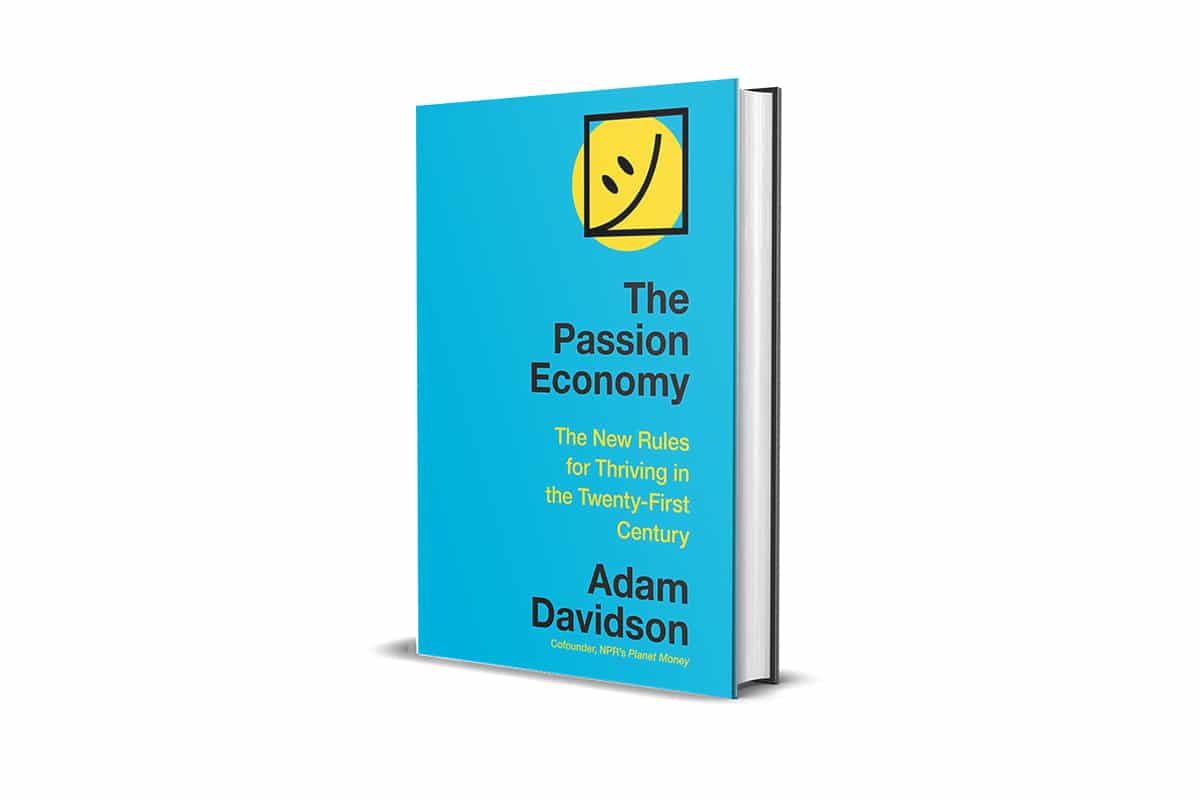 The Passion Economy is the latest book by Adam Davidson, journalist and co-host of NPR “Planet Money“. Its subtitle, The New Rules for Thriving in the Twenty-First Century shows the ambition of the book, which examines how work and entrepreneurship are radically changing in the New Millennium. This book thus becomes an excellent user’s guide to making it in the 21st-century economy looking at the fundamental question of why do some people thrive and others not?

As you start flipping through the book, the first thing that is immediately clear is that it is different from many management books around. The author does not refer to case-studies from Silicon Valley, nor examines Fortune 500 companies or start-up unicorns. He dedicates time to an often neglected part of the economy: Small and Medium Enterprises. The reason being that he is interested in understanding the roots of what we commonly define as entrepreneurship. More specifically, he looked at all those cases where individuals have been able to make the difference in the rapidly changing economy. What made them different? What made them Succeed?

During the 20th century, the economy was built on mass manufacturing goods to sell around the world as cheap and fast as possible. That economy still exists, Davidson says, but the internet created a new space unlike any that has existed before.

In this space, entrepreneurs can find niche markets that are “global”, where they can develop specialised product and services that are fueled by Passion and are not subject to the limitation in pricing. This is the core theory of the book, which shows, through several examples, the way that many SMEs contradicts traditional economic laws based on offer and demand and price minimisation.

Our economy can no longer be described with the simple binary of the twentieth century, where on one side is money, stability, and routinization and on the other is passion, personal expression, and financial uncertainty.

The Rules of Entrepreneurship

A big part of the first chapter is dedicated to the research work of Scott Stern from MIT, who has studied and identified the rules of entrepreneurship. What many of us think of a mystery attitude, a gut feeling, or so can instead be crystallised in a demonstrated set of rules. His research was focused on how entrepreneurs faced much uncertainty. Instead of focusing on traditional economic research methods, he used journalistic research to investigate how many individuals thrived (and others did not) faced with uncertainty.

The answer he found seems, upon first reading, almost trivial: the difference between successful and not successful businesses is Strategy. Everybody talks about Strategy, correct? Yes… but the majority of the tools and models have been created for large enterprises, not small ones.

Scott Stern has therefore identified four steps that allow an entrepreneur to define Strategy to translate her business idea.

Once you have answered all of the above, a successful entrepreneur will win only if she can be “all-in”, working within the boundaries of the approach.

The whole idea is simple, straightforward: know what you are selling, who you are selling it to, and how to structure a relationship with your customers that will endure.

Chapter two outlines what Davidson identifies as the Eight Rules of the Passion Economy. These will be analysed then in the rest of the book through examples and case studies. Let’s see them in detail.

Each of these rules seems simple at the start, yet the fact that most business contradicts many of them is the main reason why so many get out of business so quickly. Passion becomes a unifying factor across all eight, and together with Stern’s question, allows to frame successful strategies for any new business venture.

The role of Employees

If it’s easy to see Passion in entrepreneurs, what about more traditional employees? Davidson is very clear about this: Stern’s four questions need to be answered by every employee in every company, even the largest one, to ensure enduring success.

You will become a more valuable employee, or you will figure out, before others do, that your employer is stuck in old thinking and it’s time to find a job at a more promising, strategy-oriented firm.

Not only, but also the Eight Rules do apply to workers. For an employee, Salary is the price you charge… if you decide to be a commodity, you will be paid the market average. If not, you can make your own price based on the Passion you deliver. If you think about it, this is the principle upon which Netflix built part of its famous culture.

Chapter 11 is particularly exciting in this regard, as it focuses a lot on the work of Humu (the company established by Laszlo Bock, former CPO of Google), and the link between economic and psychological research. It looks at The Nudge as one of the most interesting effects of the behavioural economy. It identifies in HR as one discipline that is luckily evolving and can give some concrete answers to how the Passion Economy can further develop.

The book opens a discussion point that will need some further research. It opens the eyes on a reality that is rarely seen and understood, through a journalistic lens that makes it pleasurably easy to read. But what is the effects on organisations of all sizes is somewhat challenging to be immediately understood.

“This is not a book about geniuses who went to Harvard and used their dad’s money to start a business,” the author says. “These are regular folks — many of them grew up either poor or lower middle class or working class — who figured some things out.”

As I read through, I made some mental connections with a few of the books recently read. Drive by Daniel Pink comes immediately to mind, as it researched some of the elements that drive Passion. So does Sinek’s Start With Why. The critical difference, however, is that this book does not interrogate itself on the intimate reasons of how a passion is formed, but instead focuses on the results the Passion can give in terms of optimal performance and business results. In an organisational environment, it is the link between these two elements that are the core of the Human Resources profession.

What do you think about the Passion Economy?

The Passion Economy in a Nutshell

To be a truly creative company, you must start things that might fail.