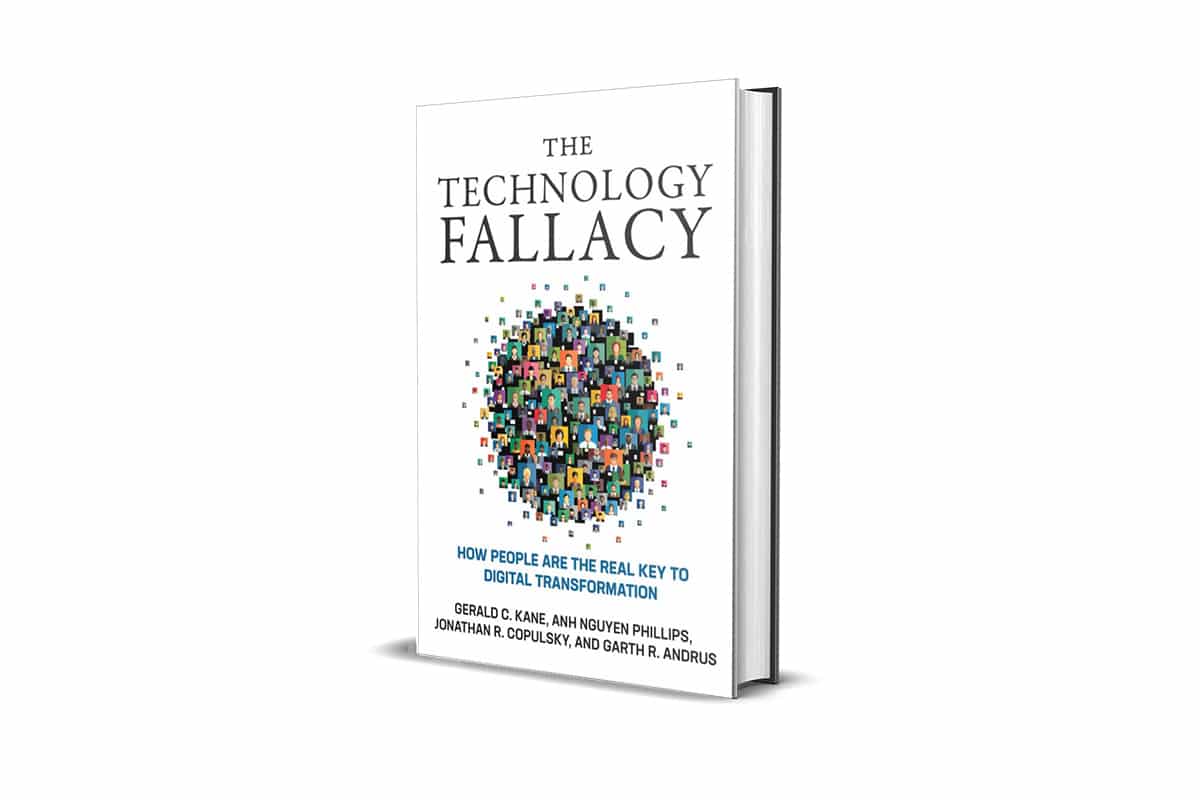 The Technology Fallacy by Gerald C. Kane, Anh Nguyen Phillips, Jonathan R. Copulsky, and Garth R. Andrus is the result of a partnership with MIT Sloan Review and Deloitte, and through a focused research on both Digital and non-digital companies, has identified some common traits that successful digital players should have.

This book is deeply rooted in the analysis of the survey and interviews done by the authors, and the cluster analysis where organizations have been clustered on a maturity cluster. The concept of Digital Maturity itself Is one of the cornerstones of the book and is defined as:

aligning an organization’s people, culture, structure, and tasks to compete effectively by taking advantage of opportunities enabled by technological infrastructure, both inside and outside the organization.

The authors prefer the concept to Maturity vs the one of Digital Transformation, to underline, among others, the fact that it is more of a complex journey than a drastic yet one-dimensional change.

Digital Transformation is happening. And everybody knows it.

Most books around the theme of Digital Transformation, use multiple pages to explain what’s happening outside in terms of technology progress and try to convince all of us of the imminence of a transformational era. The good thing that this book reports is that everyone already knows that Digital Transformation is happening. Which must be a good news for all those authors that have written about it. The key question then becomes why are companies not doing enough around it. There are many possible answers for this, but one argument that the authors make is that

Established companies in particular typically face significant challenges from digital transformation—one of the biggest is their past success.

A typical threat in many situations, which is that of not being able to recognize why change is needed. But the research goes on and identifies more threats, that are implicit in the way organizations are structured and work.

What is identified as gap with Digital native companies, has a lot to do with the following items:

“Digital Disruption is Really about People”

One of the key contributions of The Technology Fallacy is around the centrality of People (and culture) is facing disruption. It’s not the first for sure to focus on this, but it does it by clearly framing one of the key problems that the acceleration of Technology has created to organisations.

The true challenge of digital disruption facing organizations (and, indeed, a major part of the solution (…)) is people – specifically the different rates at which people, organizations and policy respond to technological advances.

The authors focus on three gaps that are relevant for this:

Each of these gaps poses a different challenge for companies, but at the core, the suggestion is the absorptive capacity of all the employee of the company, i.e. their capacity to internalize change to narrow the adoption gap.

Intentional Strategy to move on

Most of the respondents to the survey have identified the Lack of Strategy as the top barrier from maturing digitally.

For the authors, this seems a typical issue of the tradeoff existing between established and new initiatives, identified as exploration vs. exploitation, and the problem into implicitly balancing colliding priorities.

One of the solution proposed it to understand that developing a digital strategy is not a “once in a while” process, but instead it a recursive process that loops a number of repetitive steps, all relevant, and where there needs to be a strong balance between short term and long term strategy.

The example that the authors introduce in chapter 5, is that of Duct tape. Based on the academic concept of affordances, which essentially suggests that people and technology are fundamentally entangled with one another, and which leads to the fact that merely owning and implement ting technology is not enough to deliver business advantage.

Our research finds that effective leadership is one of the most critical factors associated with digital maturity.

I share the position expressed in the book, that Digital Maturity does not require a new type of leadership. After all, Digital Transformation is only partly about technology; it is also, and more importantly, about using new technology to enable novel or more effective business strategies. Which, we all agree, is the primary purpose of leadership in a business environment.

The issue is that too many people see positive digital leaders as a kind of wizard. This because there is still a lot of technological ignorance spread across many levels of management. For sure a good Leaders that can improve digital maturity need to have a strong technical mastery, and/or digital literacy. Through the survey, the authors identify 4 “skills” that make or break a digital leader (none of them is new, is just their relevance that changes).

One of the other critical suggestions of The Technology Fallacy, is that we need to move away from traditional talent assumptions based on skills, and invest in searching and creating the correct mindset. The pace of change imposes a continuous updating of skills, which leads to creating a continuous learning environment and a growth mindset across all individuals in the company.

Joined with the above mentioned distributed leadership, this trait will be the basis to transform the organisation into a talent magnet, capable of attracting and retaining the correct talents needed to sustain the change.

Transformative actions need to be taken also in the other talent processes, particularly in helping forming the Work of the Future. As people become lifelong learners and change impacts roles and tasks continuously, people will have to pivot more often across roles, charting their own career paths in different ways than in the past. A topic that I will treat in a future post.

Any attempt to make one’s company more risk-tolerant, more agile, with more distributed leadership, and so on must involve more than simple lip service from management on these issues.

Maturity will come only by creating the right culture mix. And this will come by realizing three important steps: one is that treating Digital Culture is the best way to drive adoption. The second is that digital culture is not just an adaptation to what we have today, but is a distinct and consistent product associated with digital maturity. Which leads to the last point: Digital Culture can only be intentional.

I’ve already discussed how important Digital Culture is for Traditional companies, and this books frames perfectly the concepts illustrated, about the mix of practices and needs to repurpose some of the traditional practices, as a strategic way.

One of the intentional elements that we need to consider is collaboration, which is a central element in successful digital companies. Which is not just dropping slack or yammer into the set of tools of the company, but making sure that we radically change the perception of the traditional management style which is not rooted on collaboration.

I think this book is really a must-read for every person dealing with Digital Transformation (or Maturity). Far from presenting a “simple” recipe, it candidly illustrates the complexity of the journey that most organizations will need to undertake.

One of the key learnings for me is that the intentionality needed to become more digital is the “deal-breaker”, and is the area where most organization fail. In too many cases I see an attitude about “let it happen”, instead of driving.

And you? How did you find the book?

The Technology Fallacy in a Nutshell

Your work is going to fill a large part of your life, and the only way to be truly satisfied is to do what you believe is great work. And the only way to do great work is to love what you do. If you haven’t found it yet, keep looking. Don’t settle. As with all matters of the heart, you’ll know when you find it.